The MI 6800C QHR System is a fully automated primary standard developed as an economic means to provide a highly reproducible resistance standard.

Liquid helium shortages, erratic deliveries, and steady price increases have become commonplace. This shortage, along with continuous price increases causes many labs to have difficulty efficiently reaching their measurement goals. The 6800C requires no liquid helium to operate.

The 6800C was developed over many years’ experience in quantized hall system design, resistance measurements, and cryogenics. It is modular in design and consists of three parts: sample, cryogenics system, and bridge measurement system. These components may be purchased separately.

The QHE device is mounted on a special probe that passes through an airlock so as to maintain the system clean and free of atmospheric gas and other impurities that may otherwise condense. This is especially important when using unprotected QHE devices as they need to be protected from water contamination. Two probes are offered, one as described for metrology purposes and the second for general use as a research tool.

The system has been specially designed for a dual sample platform to allow for GaAs/AlGaAs and Graphene QHR sample use. Both samples can be inserted at the same time for sample to sample comparison. 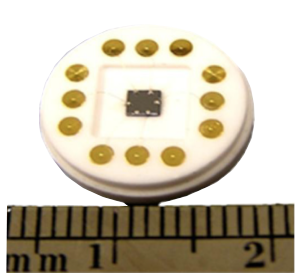 The standard sample platform has 8 electrical connections using PTFE insulated silver wiring to a TO-8 socket. The probe is shipped with two TO-8 sample platforms as standard. A copper cover protects the sample during insertion and removal.

The 6800C Resistance Standard sample provides the absolute value of resistance related to the Von Klitzing constant of 25 812.807 4593 Ω. Operating on step I = 2 plateau and i = 4 plateau, the 6800C compares the QHR value of 12906.40373 Ω to either a 10 kΩ or 1 kΩ resistor. The reference or sample, developed at the National Research Council of Canada (NRCC) for Gallium Samples, and developed at the National Standards Institute of Technology (NIST) for Graphene based samples.

MI-Europe s.r.o. is registered in the Commercial Register, Section C, Entry No. 46844, maintained by the Municipal Court, Brno

We use cookies on our website to give you the most relevant experience by remembering your preferences and repeat visits. By clicking “Accept All”, you consent to the use of ALL the cookies. However, you may visit "Cookie Settings" to provide a controlled consent.
Cookie SettingsAccept All
Manage consent

This website uses cookies to improve your experience while you navigate through the website. Out of these, the cookies that are categorized as necessary are stored on your browser as they are essential for the working of basic functionalities of the website. We also use third-party cookies that help us analyze and understand how you use this website. These cookies will be stored in your browser only with your consent. You also have the option to opt-out of these cookies. But opting out of some of these cookies may affect your browsing experience.
Necessary Always Enabled
Necessary cookies are absolutely essential for the website to function properly. These cookies ensure basic functionalities and security features of the website, anonymously.
Functional
Functional cookies help to perform certain functionalities like sharing the content of the website on social media platforms, collect feedbacks, and other third-party features.
Performance
Performance cookies are used to understand and analyze the key performance indexes of the website which helps in delivering a better user experience for the visitors.
Analytics
Analytical cookies are used to understand how visitors interact with the website. These cookies help provide information on metrics the number of visitors, bounce rate, traffic source, etc.
Advertisement
Advertisement cookies are used to provide visitors with relevant ads and marketing campaigns. These cookies track visitors across websites and collect information to provide customized ads.
Others
Other uncategorized cookies are those that are being analyzed and have not been classified into a category as yet.
SAVE & ACCEPT