The model 4310 is a series of ten-element precision resistance standards. The model 4310 insures that you get the best performance on the market today. Combined with MI’s experience in automated resistance measurements the 4310 is a temperature controlled, 10-element working resistance reference.

The resistor elements mounted in the chamber are the same elements that are used in the MI 9331 series of standard air resistors. The temperature coefficient of these resistors is reduced by controlling the temperature of the internal chamber to achieve its excellent long term stability.

The internal chamber of the 4310 is isolated from case and can be grounded or guarded. The temperature of the chamber is monitored using a thermistor and bridge circuit. A variable gain potentiometer on the front panel can be adjusted for reading the temperature shift.

The resistor elements are maintained at 30 °C, with an operating environment temperature range extending from 18 to 28 °C. Other chamber temperatures are also available.

The model 4310 can be used as a bench top or can be mounted in any standard 19-inch instrument rack.

A typical drift graph of the 1 kΩ element is shown below. These graphs will vary from element to element. 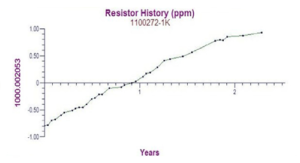 MI-Europe s.r.o. is registered in the Commercial Register, Section C, Entry No. 46844, maintained by the Municipal Court, Brno

We use cookies on our website to give you the most relevant experience by remembering your preferences and repeat visits. By clicking “Accept All”, you consent to the use of ALL the cookies. However, you may visit "Cookie Settings" to provide a controlled consent.
Cookie SettingsAccept All
Manage consent

This website uses cookies to improve your experience while you navigate through the website. Out of these, the cookies that are categorized as necessary are stored on your browser as they are essential for the working of basic functionalities of the website. We also use third-party cookies that help us analyze and understand how you use this website. These cookies will be stored in your browser only with your consent. You also have the option to opt-out of these cookies. But opting out of some of these cookies may affect your browsing experience.
Necessary Always Enabled
Necessary cookies are absolutely essential for the website to function properly. These cookies ensure basic functionalities and security features of the website, anonymously.
Functional
Functional cookies help to perform certain functionalities like sharing the content of the website on social media platforms, collect feedbacks, and other third-party features.
Performance
Performance cookies are used to understand and analyze the key performance indexes of the website which helps in delivering a better user experience for the visitors.
Analytics
Analytical cookies are used to understand how visitors interact with the website. These cookies help provide information on metrics the number of visitors, bounce rate, traffic source, etc.
Advertisement
Advertisement cookies are used to provide visitors with relevant ads and marketing campaigns. These cookies track visitors across websites and collect information to provide customized ads.
Others
Other uncategorized cookies are those that are being analyzed and have not been classified into a category as yet.
SAVE & ACCEPT